In this week’s blog, Phius Senior Scientist Graham Wright discusses his experience at the recent Mass Timber Conference in Portland, Oregon, and gives his thoughts on the concept of mass timber construction.

I went to the International Mass Timber conference in Portland, Oregon last week to see how that relates to our vision at Phius of “a world where every building supports the health of people and planet” and our mission to “make passive the zero-carbon building standard.”

My overall impression/conclusion for now is that:

Let’s just say I’m protective of the biosphere and skeptical of industrialized exploitation of it. For example, I take a dim view of most biofuels. The reason is that even if you have a theoretically renewable resource, if you build up both an industrial-scale supply and a mass-market demand for it, you might build an industry that has an imperative to overexploit the resource and ruin the resource base.

The Mass Timber conference was a trade-association, let’s-grow-the-industry type of event – 88 exhibitors, long breaks for networking; the breakouts were dubbed education sessions. It’s owned by the Forest Business Network, which states its goal as: “At FBN, we help forest product businesses grow and prosper. Period.” The US Forest Service was an Event Partner, and the Service has a Wood Innovations program that “expands and creates markets for wood products and wood energy¹ that support long-term, sustainable management of National Forest System lands and other forest lands.”

The organizers clearly anticipated concerns about deforestation and took pains to address this. Brian Brashaw of the Forest Service Wood program says that forests in the US are generally well managed, both public and private.² In the 2022 International Mass Timber report they handed out, Chapter 2 is about the North American Forest Resource – sustainability, diversity, health, fire resilience, carbon (2021 report here). I went to a Wednesday breakout session on “Working, Healthy Forests as a Climate Solution,” and there was an afternoon plenary on “Specifying and Sourcing Mass Timber: Is my Project Hurting or Helping Forests.”

The story I heard was basically that: 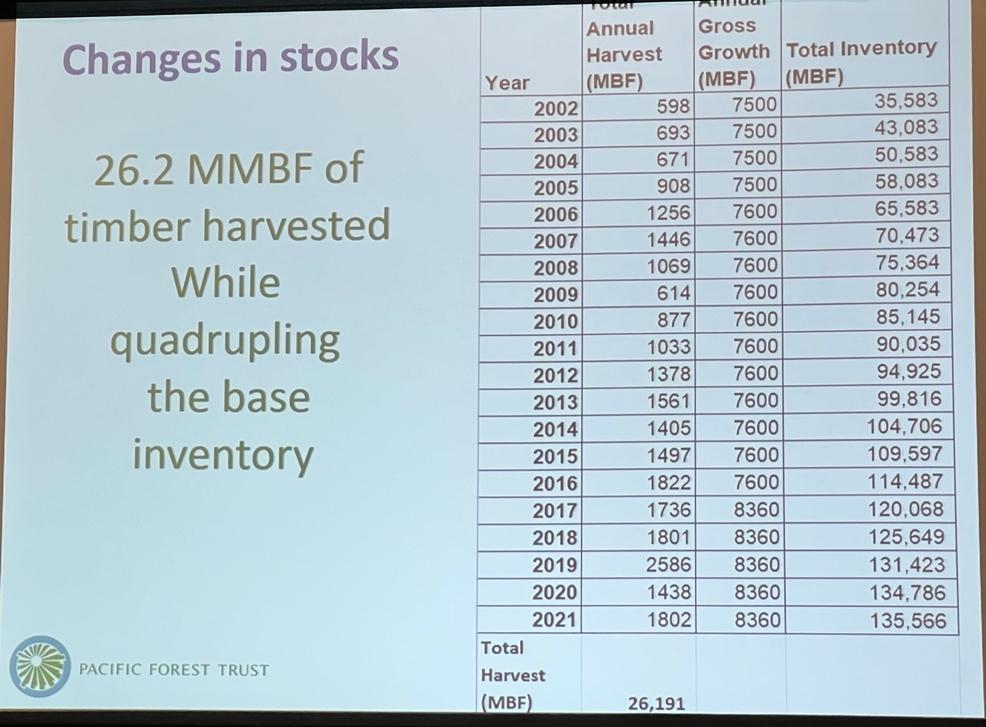 Dave Tenney of the National Association of Forest Owners described three forest certification systems as “highly credible” and “an easy button for designers.” They are:

Mr. Tenney had a slick presentation that can be viewed at forestcarbondataviz.org.³ Later, it was mentioned that there is another option called community-process restorative (or something similar) that can be more local and less documentation-intensive – perhaps more appropriate for a tribe-owned forest (sounded like a farm-to-table kind of concept).

Ms. Wayburn’s point about older trees agrees with something I heard a few months ago on PBS Terra, “Eventually after 10 to 20 years, newly planted forests will become carbon sinks. But the problem is we don't have 20 years to address climate change. Planting trees now might help in the long run, but those old forests are really the key to storing carbon before we hit tipping points for climate change.”

The argument was made that wood markets can fund/support these mitigation benefits. Portland Mayor Ted Wheeler was hopeful the mass timber business could help with affordable housing and even reduce the urban/rural political divide by creating jobs in both.

As to the second point – room to grow the mass timber industry – it was argued that at least in the national forests we need to reduce the amount of biomass (to reduce fire risk) in the near term, and that tradeoffs between managing for timber and managing for carbon sequestration disappear over the long term. Brian Luoma of Westervelt (formerly Gulf States Paper) asserted that doing thousands of mass timber buildings a year wouldn't dent the resource. I haven't checked the math on this, but I noted a couple other pieces of context: apparently most of the deforestation in the U.S. happened in the 19th century. Since then, the forest acreage has been about net neutral, but a 75-year period of former pastureland reverting to forest is just now coming to an end, and there's an uptick in land conversion at urban boundaries. About 2% is being harvested every year, but the industry is also replanting 2% a year.

Final point of positivity before the caveats. Our penchant for keeping structural elements warm and dry with insulation and air-sealing and water management will be helpful to mass timber. Experiments reported by Grant Kirker of the US Forest Products Laboratory showed that they could get fungus to rot the stuff when wet, and termites would eat it from the inside out. We can keep all that away from them.

Hesitancy about scale-up is part of the reason I mentioned only new construction at the beginning, as the scale of that is less than what’s needed for retrofit. The other reason is that mass timber is heavy. One of the demos on the tour of the Tallwood Institute was an exterior wall retrofit concept. On their single-story prototype, they had to add foundation thickness to handle the weight (see Figure 2). Our RMI colleagues at REALIZE California were mentioned as a competing concept that was using steel to keep things lighter.

For new construction though, substituting mass timber for steel or concrete looks like a climate benefit for now. I say for now because those industries are also working on paths to decarbonization – electric-arc furnaces, pulverized fly ash, etc. It was also pointed out how recyclable steel is, and therefore how mass timber could lose its substitution advantage at the end of life, from a life cycle analysis perspective, if there isn’t some plan to avoid burning or even composting it. It would need to be reused or perhaps bio-charred. The MT report acknowledges this point and says, “the substitution benefits in the buildings completed in the last 10 years, however, are very real and can be expected to be similar in the next 5 to 15 years.”⁴

It was mentioned a couple of times that life cycle analysis – whole-building life cycle analysis – has been a friend to the mass timber industry. However, the main speaker about it, Jonah Greene of Colorado State, admitted that “it is easy to make monumental mistakes.” One thing I question is their practice of taking a big negative carbon emission credit for the building, for using a lot of wood products. Coming at this from the retrofit perspective, my thought is there is a point in time prior to which any emissions that happened are out of scope, that the past emissions from say the steel structure of a building being retrofitted don’t count, nor even those of reclaimed insulation materials for example, if all that happened prior to any thought of retrofitting the building.

It seems OK to reuse such things and only count the emissions associated with the new products and services. By that logic, one should also not count the carbon sequestration that was done by the living trees decades ago. It seems like “creative accounting” to ignore long-ago carbon emissions but take credit for long-ago carbon sequestration. There are ISO standards that govern environmental product declarations and life cycle analysis: ISO 14040, 14044, 21930. I’m not clear on whether these standards speak to the question of a starting point or if they are open to interpretation. The MT report prologue admits that carbon accounting around wood products is contentious. In the “All Models are Wrong, Some are Useful” article, Dave Atkins writes, “The Nature Conservancy is working on what it calls the 3S modeling framework for the carbon effects from the forest to the building. The three S’s are sequestration of carbon in the forest, storage in buildings, and substitution of lower embodied carbon materials for higher.”⁵

The Conservancy’s sidebar about it says, “Forest systems and sustainable…wood for use in construction are complex systems. Linking these two systems involves creating a system in itself that does not now exist. Forestry practices are not accounted for, for example, when assessing the climate mitigation potential of the wood products used in construction. Carbon tends to be expressed only through building materials, and the impacts are widely misrepresented until building materials get to the site.”⁶

Again, all in all, I am mostly convinced that mass timber is OK for now, in new construction, provided that the wood is certified by FSC, SFI, ATFS, or an equivalent local community-process restoration agreement. (I’m not sure about Canada, did not hear much about that even though it was billed as an international conference). It seems pretty clear that storing wood in buildings is better than letting it burn in the forest or burning it as fuel on purpose. But we should be careful about claiming carbon neutrality from it.

As evidenced by the research going on at the Tallwood Institute in Corvallis, the sticky wickets for mass timber are structural, fire and acoustics. But the industry has set up information resources to help builders with these. Think Wood and Woodworks were exhibitors. Woodworks is involved in organizing the conference and is funded in part by the U.S. Forest Service.

I note with bemusement that, along with the Tallwood Institute, there is another Institute in Corvallis, Oregon, that has quite a bit to say about carbon and that is the Post-Carbon Institute. I may ask them to check out this mass timber business.

Another session I went to was about Appropriate Digitization and Automation in Offsite Wood. This was very pertinent to our involvement with the DOE’s Advanced Building Construction initiative, but this post is already too long.